Articles on this Page

Yep. That's what I am. I failed to post yesterday. You see, the challenge was that for the month of August, there was to be a daily post about anything hot. I was doing pretty well up until yesterday. I didn't get very far, did I? To my credit, though, I am a girl that posts about every three months, so I've upped my output quite a lot.

I've been told that if I post twice today, it will make up for the missed one yesterday, and I'll be back on track.

Here it is, the second post of the day. I'm back on track!

I've decided that for my hot post, I'd go with a decidedly "not hot" post. I'm going to post photos from Luna's birthday party, and since Jackie is terribly afraid of fire of ANY kind, we were not able to put any candles on the cake.

Luna wears a purple collar, which is why I went with the purple cake: 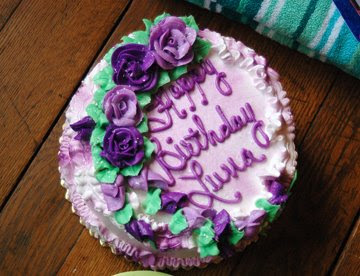 It's pretty, isn't it? Here she is waiting expectantly for a first lick. Did I say lick? I meant look: 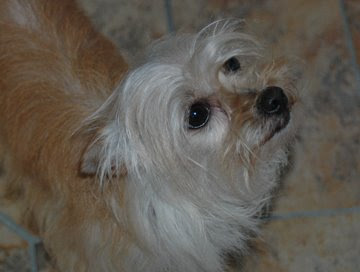 As far as I know, this was her first birthday party. She seemed to enjoy herself and couldn't wait for her first look at her cake: 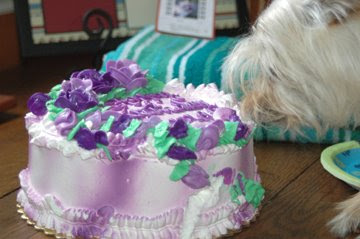 And yes, her first lick. 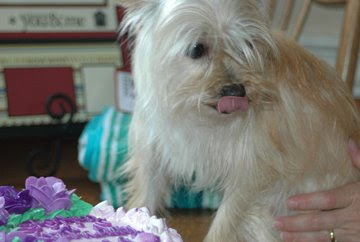 I tried to stop her, but she was too fast for me. Guess which piece she got? 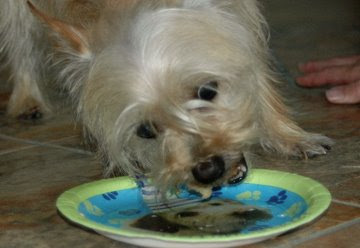 She loves cake. I knew she would. I think that she couldn't be my pet anymore if she didn't like cake. The kits got a lick of some frosting, too.

For gifts, she got a squishy ball, a Littlest Pet that looks like her, and I got her her very own bath towel for that bathing ritual she hates so much. It won't make it any more likable for her, but at least now she has her own towel.

Eleven is my favorite number. And it's decidedly not hot. When you look at the number 11, it looks calm and in control. Not hot.

It's 11:45, and once again, I'm getting it again right under the wire. I'm exhausted, so this will be short. On the first day of my vacation, I had great plans to stain my deck, which I did, but it took twice as long as I thought (and I'm not finished yet), plus, I worked some more on my flower bed that I'm digging fresh. Do you have any idea how heavy sod is? I had great plans to go to Sam's to watch the meteor showers, but when I came in from the yard at 8:45, I was just too exhausted. Sorry, Sam. This old girl just can't keep up.

The following is from my friend, Paul. It made me laugh, so I thought I'd post it here for all of your reading enjoyment. I have his permission :) Enjoy...

For those of you familiar with the Youngstown area, you've most likely heard of the Jib Jab Hot Dog Shoppe. Everyone everywhere should have heard of it by now because their sign claims that they're "World Famous" and I seriously doubt that people who have made of living out of serving whatever mystery material those things are made of would lie to us.

Anywho, about 10 or 12 years ago they got so big that they outgrew their location in Girard and built a brand new building that is nothing less than a shrine to this American staple. It's a veritable Taj Mahal as far as hot dog diners go. A building this large could only be built in the thriving metropolis of... well, Girard. Right next door to the existing old one.

I could go on and on about this fine establishment's lack of brain power behind the counter, my general disdain for its questionable patrons, or its quirky position in our society of being a huge Sunday afternoon dating locale for the broke local teenagers, but most of that would be a retread of some of my earlier blogs so I won't waste your time with that. Instead, I'd like to touch on what's become of the old building that used to house of this fine, fine blog fodder.

It's now a Spay and Neuter Clinic.

This got me to wondering... Girard is one of those weird little towns that you would only hear of in the Offbeat section of USAToday, so I wouldn't put it past them to do such a thing... I wonder if I look back through the town's records if I'll find some weird zoning restriction for that particular parcel of land that would only allow it to be used for businesses pertaining to wieners...

Didn't see that coming did you?

I haven't blogged here in such a long while! I have some important news that I know will come as a shock to some of you. I hate winter. There. I said it.

I'm no longer a fan.

It's not the snow so much as it is the cold. Don't get me wrong. I still prefer cooler weather more than hotter weather (though I did find myself quite enjoying the summertime weather this year), I just don't like the BITTER cold. I can't stand not being able to get warm. Owning a house means you own the bills, too, and with heating costs going through the roof, I keep my thermostat at a relatively cool 64 degrees. There are times when it's fine. I put on a sweatshirt, socks and slippers and for the most part I can stay toasty. But my hands! I can't go around wearing mittens all the time. How would I work? I don't even really like having to wear all those clothes around the house.

Do you want to know what else I don't like? The major production you have to go through every time you exit or enter the house. Hat, scarf, coat, gloves, etc. I hate shoveling the driveway. Thankfully, I park my car in my garage, but I know that if I had to scrape it off every morning, I would hate that, too.

My car gets horrible gas mileage in the snow/winter, the sky is always gloomy and people get depressed and take it out on others.

I still like to ski, so that's still winter's saving grace.

Here's wishing for sunshine and sandals!